Investing.com – Gold prices slumped as much as 2% on Tuesday, falling beneath key $1,900 support, as negotiations hit a snag again for an economic stimulus to help millions of Americans financially distressed by the coronavirus pandemic.

Any fiscal plan that ends up issuing more money props up gold in theory, and the yellow metal hit three-week highs above $1,939 on Monday in anticipation that Republican lawmakers aligned with Donald Trump might strike an agreement after all with rival Democrats on a $1.8 trillion relief proposed by the president.

U.S. House Speaker Nancy Pelosi, who is the top Democrat in Congress, however, ruled out a deal on Tuesday after Senate Majority Leader Mitch McDonnell shrank the offer further to just around $500 billion.

“The stagnation in Washington over the next stimulus package continues to pressure assets like gold that were relying on the weakness in the dollar for the next wave of support,” David Meger, director of metals trading at High Ridge Futures, was quoted saying by Reuters.

There was another reason for gold’s dive: the dollar.

But even before the latest impasse over Covid-19 relief, the dollar had rallied with little justification since August, hampering gold’s attempts to return to the $2,000 highs hit around that time.

Despite a gaping U.S. fiscal deficit and record recession, thousands of business closures, historic unemployment and other economic ills forced by the pandemic, the greenback had stubbornly held above the 93-support zone for most of the past two months — making it one of the most value-distorted assets.

House Speaker Pelosi said on Tuesday that while she remained hopeful for a stimulus deal, “significant changes must be made to remedy the Trump proposal’s deficiencies.”

“Tragically, the Trump proposal falls significantly short of what this pandemic and deep recession demand(s),” she added in a letter to her Democratic colleagues, published on Tuesday.

Congress passed four packages of the Coronavirus Aid, Relief, and Economic Security (CARES) Act in the second quarter of this year, dispensing roughly $3 trillion as paycheck protection for workers, loans and grants for businesses and other personal aid to qualifying U.S. citizens and residents.

Republicans and Democrats have been locked in a stalemate since on a successive package to the CARES, arguing over the size of the next relief, as thousands of Americans, particularly those in the airlines sector, risked losing their jobs without further aid. Trump, who stands for reelection on Nov. 3, accused Pelosi of playing political football over the issue. The House Speaker says any stimulus should be to the advantage of all Americans, and not for Trump’s political expediency.

Last week, Trump, after various about-turns on the issue, proposed a $1.8 trillion bill that still fell short of the Democrats’ demand for $2.2 trillion. Pelosi and U.S. Treasury Secretary Steven Mnuchin have spoken on the phone at least twice since but have been unable to agree to a deal. Without the support of Democrats, the Senate vote on the stimulus led by McConnell will also fail the Senate filibuster test that it must pass.

The United States leads the global case count for the coronavirus, with 7.8 million infections and more than 215,000 deaths, according to data monitored by Johns Hopkins University.

The U.S. economy itself shrank at its fastest pace in history in the second quarter of 2020, contracting by 31.4 percent amid widespread lockdowns triggered by the pandemic.

While economic data has been encouraging in recent months, recovery from the pandemic itself has remained spotty. On the jobs front, the United States gained 661,000 jobs in September, less than half the gains logged in August, as labor market recovery from the coronavirus pandemic slowed. 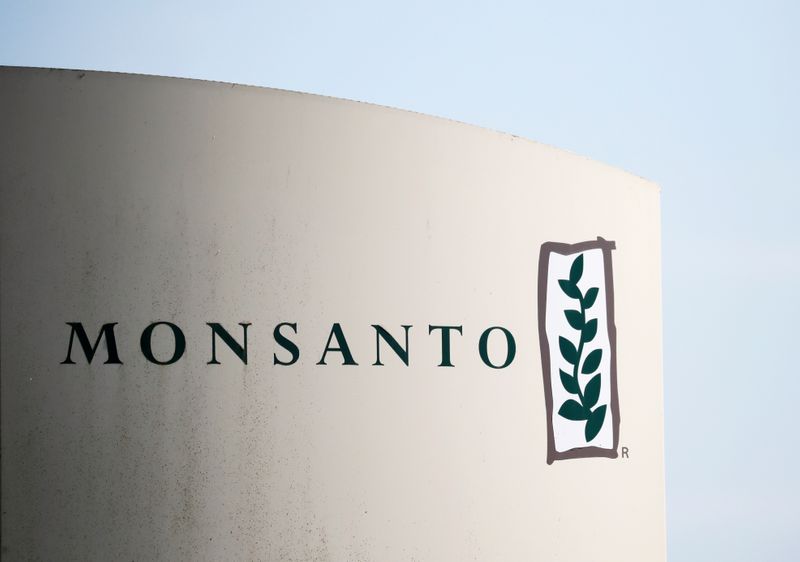 © Reuters. The logo of Monsanto is seen at the Monsanto factory in Peyrehorade

PARIS (Reuters) – Bayer’s (DE:) Monsanto (NYSE:) division on Wednesday lost a final appeal in a long-running French legal battle in which the crop chemical maker has been held liable for the accidental inhalation of a weedkiller by a crop farmer.

Monsanto had been trying to overturn a decision by an appeals court in 2019 that had found the company’s product safety information to have been inadequate in relation to the accident involving farmer Paul Francois in 2004.

France’s highest court rejected Monsanto’s latest appeal in a ruling published on Wednesday, opening the way for another court to decide on what damages should be awarded to Francois.

The farmer has argued that the fumes he inhaled from the weedkiller Lasso, a product that was subsequently withdrawn from the French market, caused neurological problems, including memory loss, fainting and headaches.

Bayer said in an emailed statement that it was reviewing the court ruling. Bayer also said in the statement that court-appointed medical experts had found previously that the incident did not cause the illnesses cited by Francois.

Crop protection products “do not present a risk to human health if they are used under the conditions of use defined in the context of their marketing authorisation,” Bayer said.

Anti-pesticide group Generations Futures, which has supported Francois in his court case, said it welcomed “this historic decision in which an agro-chemical multinational is at last found liable for the harm caused to this courageous farmer.”

Francois has previously sought damages of around 1 million euros ($1.2 million).

Bayer, which acquired Monsanto for $63 billion in 2018, has been facing a wave of litigation in the United States over allegations that Monsanto’s glyphosate-based weedkiller Roundup causes cancer.

Bayer, which argues Roundup is safe, is trying to settle the litigation through a proposed $11 billion payment.

How High Are Copper Prices Going ? – Growing Your Money

How High Are Copper Prices Going ?

Copper Futures—Copper futures in the December contract is trading higher for the 3rd consecutive session up another 465 points at 3.1955 a pound hitting a 2 ½ year high continuing its bullish momentum as this trend is strong to the upside.

Copper prices are trading far above their 20 and 100 day moving average as this trend continues to accelerate on a weekly basis as the housing market in the United States is extremely strong therefore demand for copper at the present time remains high as I still do not believe a top has been formed.

At the current time I’m not involved, however I do believe the entire precious metal sector is headed higher as I am keeping a close eye on gold and silver as I see no reason to be short copper and if you are long a futures contract continue to place the stop loss under the 10-day low which stands at the 3.03 level as an exit strategy.

The next major level of resistance is between the 3.30 / 3.50 level as there is still room to run to the upside as the volatility could even increase exponentially as historically speaking copper can have crazy price swings on a daily basis.

Inventory has fallen in all but one of the last six weeks as the economy tries to come back to life after Covid-related shut downs earlier this year.

, the U.S. benchmark, fell 2% in morning trading ahead of the data release.