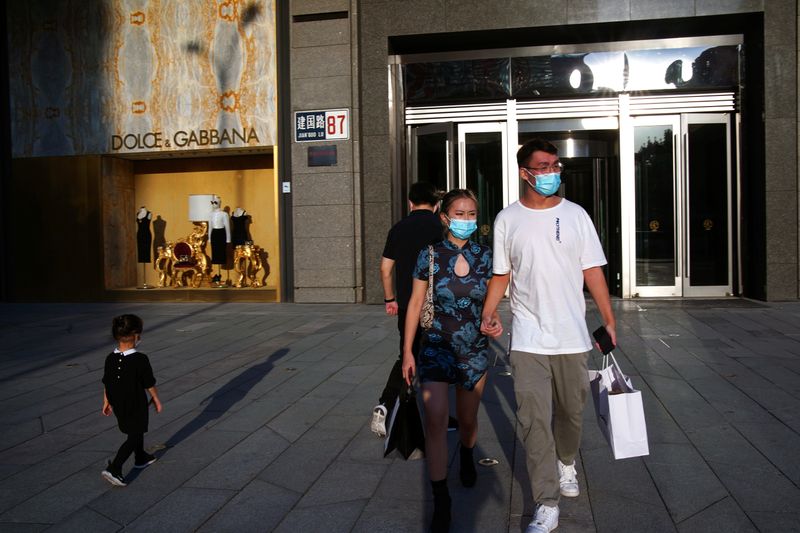 BEIJING (Reuters) – China’s economic recovery stepped up in the third quarter, data released is expected to show on Monday, as consumers returned to malls and major trading partners reopened for business, shaking off the record slump seen earlier this year.

The world’s second-largest economy likely grew 5.2% in July-September from a year earlier, faster than the second quarter’s 3.2%, according to a Reuters poll.

Policymakers globally are pinning their hopes on a robust recovery in China to help restart demand as economies struggle with heavy lockdowns and a second wave of coronavirus infections.

“China has become the first major economy to return to its pre-virus growth path, thanks to its rapid containment of COVID-19 and effective stimulus response,” said analysts from Capital Economics. However, they warned a renewed slowdown is likely from late 2021 as stimulus fades.

China’s retail spending has lagged the comeback in factory activity as heavy job losses and persistent worries about infection kept consumers at home, even as restrictions lifted.

However, that is expected to have changed in the third quarter.

In September, auto sales marked a sixth straight month of gains with a solid 12.8% growth and Ford Motor Co ‘s (N:) China vehicle sales jumped 25% in the third quarter from a year earlier.

The COVID-19 pandemic, which caused China’s first contraction since at least 1992 in the first quarter, is now largely under control, although there has been a small resurgence of cases in the eastern province of Shandong.

On a quarterly basis, GDP is expected to have grown 3.2% in July-September compared with a rise of 11.5% in the previous quarter.

The government has rolled out a raft of measures, including more fiscal spending, tax relief and cuts in lending rates and banks’ reserve requirements to revive the virus-hit economy and support employment.

Analysts polled by Reuters expect industrial output to grow 5.8% in September from a year earlier, quickening from a 5.6% rise in August, while retail sales were seen rising 1.8%, versus a 0.5% rise in August.

While the central bank stepped up policy support earlier this year after widespread travel restrictions choked economic activity, it has more recently held off on further easing.

“Because of the ongoing growth recovery but still strong headwinds, we expect Beijing to maintain its ‘wait-and-see’ policy approach through the remainder of this year,” said analysts at Nomura in a note this week.

The International Monetary Fund has forecast an expansion of 1.9% for China for the full year, the only major economy expected to report growth in 2020.

Israeli cyber company Cellebrite signed a deal in Abu Dhabi at the beginning of this month, “Globes” has learned. The deal is estimated to be worth $3 million, and was apparently signed with a government agency in Abu Dhabi.

The tools developed by Cellebrite are used by law enforcement agencies and military and intelligence agencies to obtain data and identify dangerous activity. They are also used by some of the world’s largest business corporations, such as Apple, Google, Verizon and major banks, for the purposes of (legal) internal investigations.

Helping tech cos help themselves on human rights

A source familiar with the details said that the deal was brokered by former Mossad executive David Meidan, who was formerly Prime Minister Benjamin Netanyahu’s envoy for captured and missing soldiers and who negotiated the release of Gilad Shalit, who was captured by Hamas. Cellebrite and David Meidan declined to comment on the report.

Cellebrite’s systems gather and analyze data from mobile telephones and personal computers, cloud computing, and even from civilian drones caught by security forces. According to its figures, in mid-2019 the company had 45% of the mobile telephone forensics market, and its managers have said in the past that its products represent the first work tool in 75% of police investigations globally.

In recent months, several petitions have been filed against Cellebrite, demanding that it should come under the supervision of the Ministry of Defense, because of claims concerning the regimes in the countries whose security agencies are customers of the company.

Traders Brace For Flood Of Market-Moving Events In The Week Ahead By Investing.com 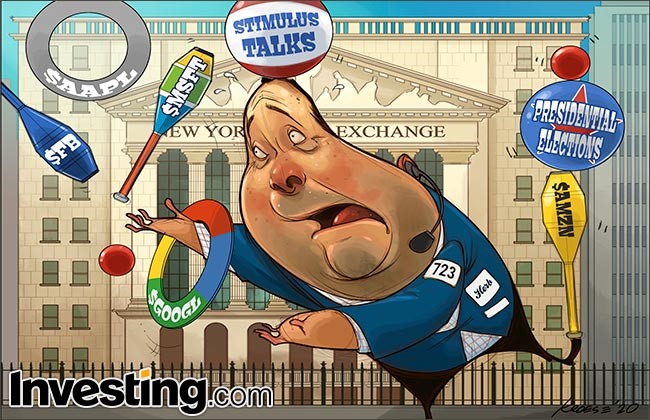 Investing.com – Stocks on Wall Street ended mixed on Friday, with the falling slightly to end a disappointing week.

For the week, the Dow and S&P 500 lost 0.9% and 0.5%, respectively, to snap a three-week winning streak. The Nasdaq meanwhile dropped 1.1%, posting its first weekly loss in five weeks.

Between uncertainty surrounding ongoing stimulus talks in Washington, political developments ahead of the looming November 3 election, a heavy batch of high-profile earnings reports, as well as key economic data, next week is expected to be a busy one on Wall Street.

Google-parent Alphabet (NASDAQ:) is scheduled to release its quarterly results on Monday, followed by Microsoft (NASDAQ:) on Tuesday. Apple (NASDAQ:), Amazon (NASDAQ:), and Facebook (NASDAQ:) are then all due to report their respective results on Thursday.

The coming week also marks an important one on the economic calendar, with the big day coming on Thursday, when the U.S. releases the first look at third-quarter gross domestic product.

After the second quarter’s shocking 31.4% decline following coronavirus shutdowns, the economy is expected have bounced back, with growth of expected in the third quarter.

Private equity firm FIMI Opportunity Funds, headed by Ishay Davidi, has sold 33% of the shares in healthcare company Simplivia to The Phoenix Holdings Ltd. (TASE: PHOE1;PHOE5) and Leumi Partners, in equal shares, for $47 million, at a company valuation of $140 million.

FIMI bought the business from Teva Pharmaceutical Industries Ltd. (NYSE: TEVA; TASE: TEVA) and set up Simplivia in 2019 at an investment of $47.5 million. Including the current deal, FIMI has made a return of $67 million on its investment. It will continue to hold 65% of the company.

Simplivia produces equipment that protects hospital medical staff from exposure to dangerous materials while treating oncology patients. Its production facility is in Kiryat Shemona and its head office is in Hod Hasharon. It employs about 200 people.