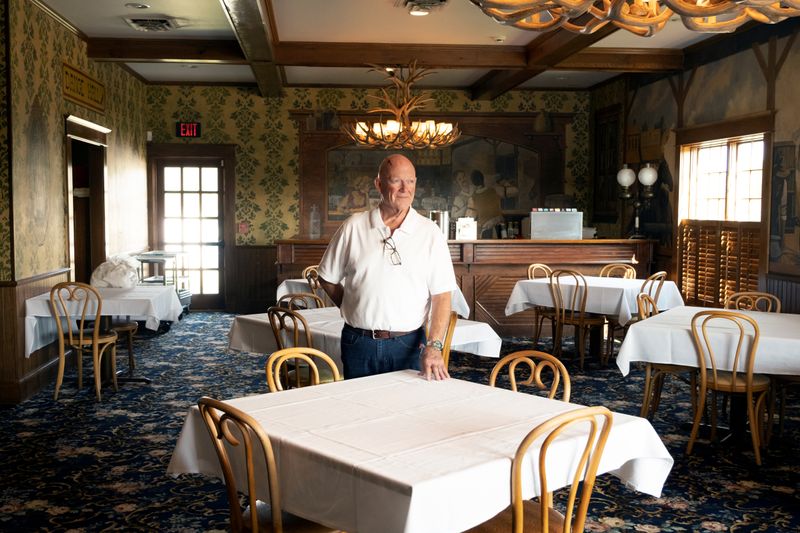 © Reuters. Kansas family restaurant survived the Depression, but not the pandemic

By Timothy Aeppel and Arin Yoon

ABILENE, Kan. (Reuters) – Mark Martin’s family restaurant weathered two world wars, the Dust Bowl, and the Great Depression, serving up heaping plates of hand-battered fried chicken, mashed potatoes and creamed corn to a devoted clientele. But it could not survive the pandemic.

The restaurant, nestled by the highway in Abilene, Kansas, closed permanently on Sept. 25, after struggling to break even amid shutdowns caused by the COVID-19 outbreak.

“We’re kind of in shock that this will be the end of it for us,” said Martin, the fourth generation to run the Brookville Hotel, a name that reflects its origins as a small hotel in nearby Brookville, Kansas that his family acquired in 1894.

The virus has upended travel and spending habits for millions of Americans. Small business failures in the first months of the pandemic were modest, however, as federal aid helped companies make payrolls as they waited for life to return to normal.

But the virus continues to spread, shattering records https://www.reuters.com/article/us-health-coronavirus-usa/covid-19-surges-in-us-midwest-broadway-dark-until-june-idUSKBN26U1OZ for new cases in the Midwest last week, while emergency federal aid is running out. With cold weather and flu season nearing, which typically brings a drop in business for restaurants even in good years, Brookville’s fate may be a harbinger of things to come.

Based on an analysis of credit card transactions by the online marketing firm Womply, one in five small businesses in the United States open at the beginning of 2020 had permanently stopped operating as of mid-September – including 23% of restaurants. About 40% of restaurants recently surveyed https://www.prnewswire.com/news-releases/100-000-restaurants-closed-six-months-into-pandemic-301130280.html by the National Restaurants Association say they will be out of business in six months unless there is more financial relief from the government.

Martin, 70, said he was hopeful in the first months of the pandemic. The restaurant secured a $57,000 loan through the federal government’s Paycheck Protection Program – a vital lifeline, he said. Three-quarters of that went to pay his several dozen employees, “which allowed us to free up those dollars to pay other expenses, like the mortgage and gas bill — all the stuff a restaurant needs,” he said.

They reopened Easter weekend for takeout only and hit their goals: 200 meals on Saturday and 400 on Easter itself. Mother’s Day was a hit, with 700 takeout meals. They were eventually able to reopen the dining rooms, with limited seating.

However, business remained half the level of a year ago, Martin said. Summer is normally the busy season, thanks to a steady stream of visitors to the nearby Eisenhower Presidential Library and Museum. Often, Brookville would have two tour buses a week stop by for lunch or dinner. But the museum remains closed, and they had just two buses all summer.

Martin cut costs everywhere, including switching to hauling the restaurant’s garbage to the dump with his own trailer to shave the $375 a month cost of pickup – but it was not enough to turn a profit.

Martin and his wife Connie rebuilt the restaurant in Abilene in 2000, painstakingly mirroring the old hotel’s distinctive look, with a round-roof facade and the words “Since 1870” in large letters. His mortgage, which helped to fund the revamp, stands at around $700,000.

There was no fifth generation waiting to take over. The couple’s only child, daughter Brandy Lea, passed away 25 years ago at age 17.

Martin has heard from his bank that there might be interest from someone who could reopen the restaurant, but he thinks that is unlikely until after the pandemic subsides. He said he has no plans to retire, in part because he has poured most of his savings into the restaurant, and just applied for a job as a courier.

Among the personal things he took with him: the framed bronze medallion Brookville received in 2007 from the James Beard Foundation when they were given an ‘America’s Classics’ award.

The shutdown has rippled through the Abilene community, population 6,300. Kim Palenske, who hostessed at the restaurant for eight years, said she knew they were struggling but was still startled when Martin decided to close.

The restaurant was so well known, Palenske said, she was sure it would survive. “We had people from Australia,” she said, “and there were people who would make a day of it to drive from Wichita to have lunch on a Sunday.”

Palenske, who also works part-time at the local school, said she will need something new to make up for the lost income. “I haven’t started looking yet,” she said. “I’m still kind of in shock.”

Customers are also reeling. Mary Stirtz and her husband, local retirees, would pick up dinner almost every warm Friday night and eat it at nearby Eisenhower Park while they watched the swimmers in the outdoor pool. They celebrated their 50th wedding anniversary in the park two years ago, with 35 dinners from Brookville for extended family and friends who attended.

EU imposes tariffs on aluminium products from China By Reuters

China’s NEV sales to account for 50% of all new sales by 2035, industry body says By Reuters 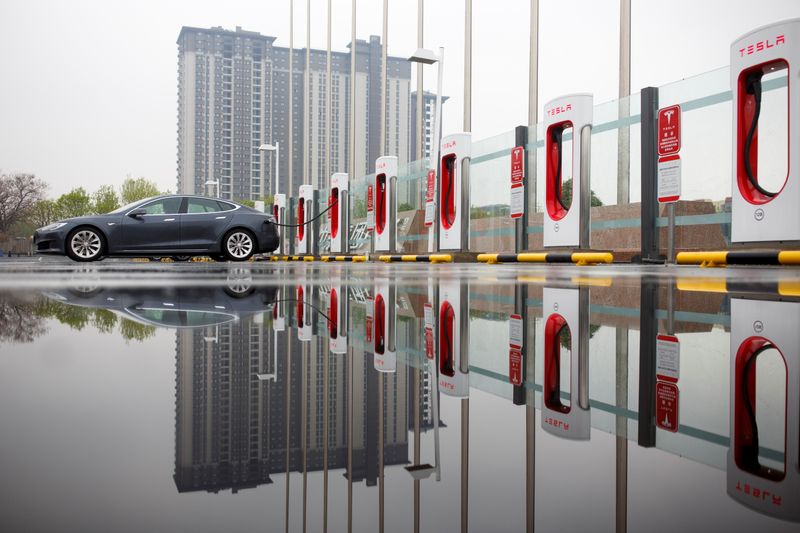 SHANGHAI (Reuters) – Sales of new energy vehicles (NEV) will make up 50% of overall new car sales in China, the world’s biggest auto market, by 2035, an industry official said on Tuesday.

The influential industry body, China Society of Automotive Engineers (China-SAE), has members of senior auto executives and academicians and is involved in the setting of the country’s mid- to long-term energy vehicle policies.

Li Jun, president of China-SAE, told the association’s annual conference in Shanghai on Tuesday that the association predicts 95% of NEV sales in 2035 will be battery electric vehicles.

Li added hybrid vehicles will make up the rest 50% of all new vehicle sales by 2035.

Russian tech giant Yandex is hiring in Israel ahead of setting up food delivery operations in the country, a source close to the matter has told “Globes.” Yandex first entered Israel two years ago with its taxi hailing app Yango and has since expanded operations to music services competing with Spotify.

Yandex is a tech giant whose search engine is the Russian language equivalent of Google. Headquartered in Moscow, the company is traded on Nasdaq with a market cap of $20 billion.

The company is now looking to carve out a slice of the lucrative Israeli food delivery market, which has grown enormously during the Covid-19 crisis. Yandex will commence operations in the Tel Aviv area first in the coming days.

As part of the Yandex.Lavka service in Russia the company also sells its own food products including fresh fruit and vegetables, dairy products and ready-made meals.

Minister of Transport Miri Regev has told the “Globes” Israel Real Estate Conference” that she is opposed to building the planned Tel Aviv Metro and would prefer to promote infrastructures that would link outlying regions with central Israel.

Regev said, “When I came to the ministry, like most Israelis, I was sure that they were already working on the Metro because people were calling the Tel Aviv light rail the Metro. So let’s put things straight. There is a plan for three Tel Aviv light rail lines, which must provide a solution for the Gush Dan region, and there is a plan for a Metro, which will cost NIS 150 billion for the part which is in the planning stages and has been deposited for objections.”

She continued, “There are the three light rail lines in Gush Dan, which suffers most from traffic congestion, which will cost NIS 60 billion, and there is a plan for bicycle paths to link up Gush Dan, which will cost NIS 600 million. Therefore, if the (Metro) plan will be put up for implementation, I will oppose it, because I think that at the moment we need to connect outlying regions with the center with an additional railway network in parallel to the coastal railway line. That would bring about a dispersal of the population and employment and move employees from the center of the country to the north and south and to Judea and Samaria.”

So at the moment you are against moving forward with the Metro?

“We will deposit the plan. Regarding the time we need to implement it, I’ll consult with the cabinet. It’s not possible to put all the money in the Dan Metropolitan area, we need to link up Israel and if we want to create new jobs in the north and south and provide a solution for the transfer of the IDF to the Negev, we must invest in accessible and available infrastructures. It is clear that at the moment there isn’t money for both.

Instead Regev says that she wants to allocate NIS 100 billion to complete Israel Railways projects including the eastern inland railway line from Rosh Ha’ayin to Lod and extend the railway line northwards from Hadera to Kiryat Shmona and southwards from Dimona to Eilat.